This version of X‑Plane is for commercial use and FAA-approved simulators. It requires one X‑Plane Professional USB key or Pro-Use Digital Download product key in addition to each copy of X‑Plane on the network. This version is very similar to the home use version of the X‑Plane 11 simulator but enables commercial uses, FAA certification checks, and ability to use a real GPS. This version is designed to replace Microsoft ESP.

The Pro USB key or digital download product key needs to be used for commercial purposes and FAA-approved simulators for flight training. It gives a Commercial Use message as X‑Plane starts up, causing X‑Plane to check for flight controls and self-test the frame rate, as required for FAA certification. Furthermore, the pro key allows you to interface with Garmin Real Simulator Units.

The Professional USB Key or Digital Download can be purchased from X-Plane.com’s Ordering page. USB key drivers for both Mac OS and Windows can be downloaded from the X-Plane.com site. Be sure to run those installers to make X‑Plane recognize the USB keys.

Configuring and Tuning Your X‑Plane Installation

Having installed X‑Plane as described in the previous chapter, you can configure the simulator in a number of ways. These include downloading the latest free update (giving you the latest set of features available), setting up flight controls, and tuning the performance of the simulator both in terms of graphics quality and frame rate.

General Use of the X‑Plane Interface

X-Plane has been written to operate on Windows, Macintosh, and Linux systems. For consistency’s sake, the layout and appearance of X‑Plane is the same across all three operating systems.
Here are a few pointers to aid in the learning process:

X-Plane’s menu is hidden. To access the menu bar, move the mouse pointer to the top of the screen. When the mouse is within a centimeter or so of the top edge of the screen, the menu bar will appear. By default the Esc key will also display the menu. You’ll find the majority of X‑Plane 11’s options in the drop down menus in the left of this menu bar.
Some of the key functions of the simulator are accessed through small icons on the right side of the menu bar however. From left to right, clicking the icons will: pause the simulator, open Flight Configuration, show the ATC window, show the map, open Settings, and open a help webpage. Keep in mind you can use keyboard shortcuts to access many of these features as well.


You can adjust almost all aspects of how the simulator runs by going to the Settings screen. Here you’ll find tabs to adjust the settings associated with the sound, graphics, networking configurations, data input and output, joysticks and flight hardware, and the keyboard shortcut assignments. Many other helpful options, such as the language and warnings, can be found in the General section. The Notification Settings button in this screen allows you to turn off or on various warnings as well.

Like most programs, the simplest way to navigate around X‑Plane is using the mouse, though there are many keyboard shortcuts to help you navigate quickly through the options after you become familiar with the program. These shortcuts are particularly important when using the mouse to fly. In that case, it is much easier to use the ‘2’ key to drop a notch of flaps than it is to let go of the controls, reach down with the mouse to adjust the flaps, and then reach back up and grab the controls again.
Also note that most instruments and controls inside the cockpit are interactive, meaning that the mouse can be used to alter switches, set frequencies, manipulate the throttle(s), change the trim, etc.

With your flight controls plugged in and X‑Plane running, you can configure how the simulator responds to input from each axis and button. Throughout this section we will refer to any input device as a joystick; the instructions apply to yokes, throttle quadrants, and rudders also. Configuring should be done upon initial set up of X‑Plane and any time new equipment is plugged in, but it is not necessary to configure hardware upon every use.
The first time a joystick or yoke is plugged in, the program can automatically take you to the joystick settings screen to configure the device.

If you selected No in the Joystick Quick-Config box, move the mouse to the top of the screen and click the settings icon, then Joystick, and continue with the steps below.

Setting Up the Control Axes

Click on the Calibrate or Calibrate Now button. This will open the dialog box allowing you to configure and calibrate the flight controls. Figure 4.2: The calibration window of the Joystick settings screen, with the device partially calibrated
To begin, move the joystick’s controls around to see how the axes are mapped in X‑Plane. As this is done, one of the red bars will move vigorously for each input that is actuated. (Note that if you are using a trim wheel, you may have to roll the wheel continuously to see which axis it is mapped to.) Thus, when the stick is rolled left and right only one bar will move a substantial amount; when it is pushed back and forth it will be a different bar.
Move your joystick through the full range of motion for each axes, and each slider through its entire range as well. Move your joystick or yoke forward and back for pitch. Move your joystick/yoke left and right for roll, and twist your joystick (if applicable) for yaw. (If you do not have or assign a yaw axis, X‑Plane will attempt to stabilize it for you.) Once all the red bars have changed to blue, click on the Next button.
Note that if you’re unable to move the controls through their full range of motion you may simply click the Accept Axis or Ignore Axis button for each axis that X‑Plane believes to be uncalibrated, but which you have confirmed has actually gone through its full range of motion.
Let go of the controls and press the Next button to begin centering the controls and setting the nullzone. When the timer’s up, press the Finish button to go back to the joystick screen and complete joystick set up. Figure 4.3: The Joystick settings screen, after calibration is completed
If any axes were not recognized automatically, or were incorrectly categorized, in the first calibration screen, you can set them in the right column of the joystick settings screen. Simply use the drop down menu to select the appropriate axis type. In addition, you will need to do this for any device that does not have a default configuration file, as all the buttons and axes will be assigned to “none” (see Figure 4.4 below). Figure 4.4: When an unknown device is used, all axes and buttons are set to “none” until manually changed
To manually configure flight control axes:
Note: Any remaining bar (if applicable) which is not actively controlled by your hardware needs to be set to none. When this is set, X‑Plane is not using the axis.

Each of the buttons and switches on the joystick can be assigned a function within X‑Plane (for example, toggling the brakes or landing gear) in the right column of the Joystick settings screen.

Figure 4.5: Clicking button 5 in the image highlights the button in the list on the right
You can tell which button you’re assigning by the mapping in the image on the left. Click on a number to highlight the line in the list on the right side of the screen. You can also press the button on the joystick and seeing which number in the list lights up.
Assign a function to a hat switch by picking from the drop down menu. Assign a function to a button or a two-direction switch by clicking the Edit button and scrolling through the list of commands, or by typing a key term in the search bar, as in Figure 4.6 below.

Figure 4.6: Searching commands for the term “brakes”
Repeat this process for as many buttons and switches as need functions assigned. If buttons appear to be missing from the list in this screen, check under the “Views” drop down for additional images of the device that may have additional buttons mapped. Close the Joystick window and the settings will be saved to preferences.

To modify the joystick’s sensitivity, press the Control Sensitivity button at the bottom of the Joystick settings screen. The three sliders in this window control the response curves for the pitch, roll, and yaw axes of the joystick.
If these sliders are set all the way to the left, the aircraft’s response to that axis’ input will be completely linear. This means that a 50% deflection of the joystick will deflect the airplane’s flight controls 50% of their travel. As these sliders are moved to the right the response becomes curved. In this case, a deflection of the joystick from center to its halfway point may only deflect the aircraft’s controls by 10%. This will dampen any aircraft movements and desensitize the user’s controls. Keep in mind, however, that in this case, the remaining 90% of the control surface deflection must take place in the last 50% of joystick movement. Thus, the controls will be dampened for the first half or so of their travel and then become hyper-sensitive for the remainder of their throw. This gives the user plenty of fine-tune control near the center of the flight control envelope to hold altitude and roll precisely, but still allows for full control authority at the extremes.
Try flying with the sliders in various different positions to see what setting works best.
To modify the stability of the aircraft, press the Stability Augmentation button. These sliders control X-Plane’s stability augmentation by damping the predicted forces acting on the aircraft’s flight control surfaces. If these sliders are all the way to the left, then there is no stability augmentation of the aircraft. As the sliders are moved to the right, X‑Plane will automatically add some stability augmentation to the aircraft, adding some elevator input to level the nose, some aileron input to minimize the roll rate, and some rudder input to counter any aircraft yaw rates. In other words, the simulator will try to make the plane easier to fly by adding control inputs for the user. The downside, of course, is that as X‑Plane adds stability, the aircraft becomes less responsive (and less realistic).
In X‑Plane 11.30, each axis can also have a custom response curve which will override the global control response curve. This allows you to do things like manually configure a null zone, or create complex curves with many control points and your choice of interpolation. Depending on the type of axis, there will be additional options to configure ranges for certain axis-specific behaviors such as beta & reverse ranges for throttles, feather range for prop controls, or cutoff range for mixture controls. 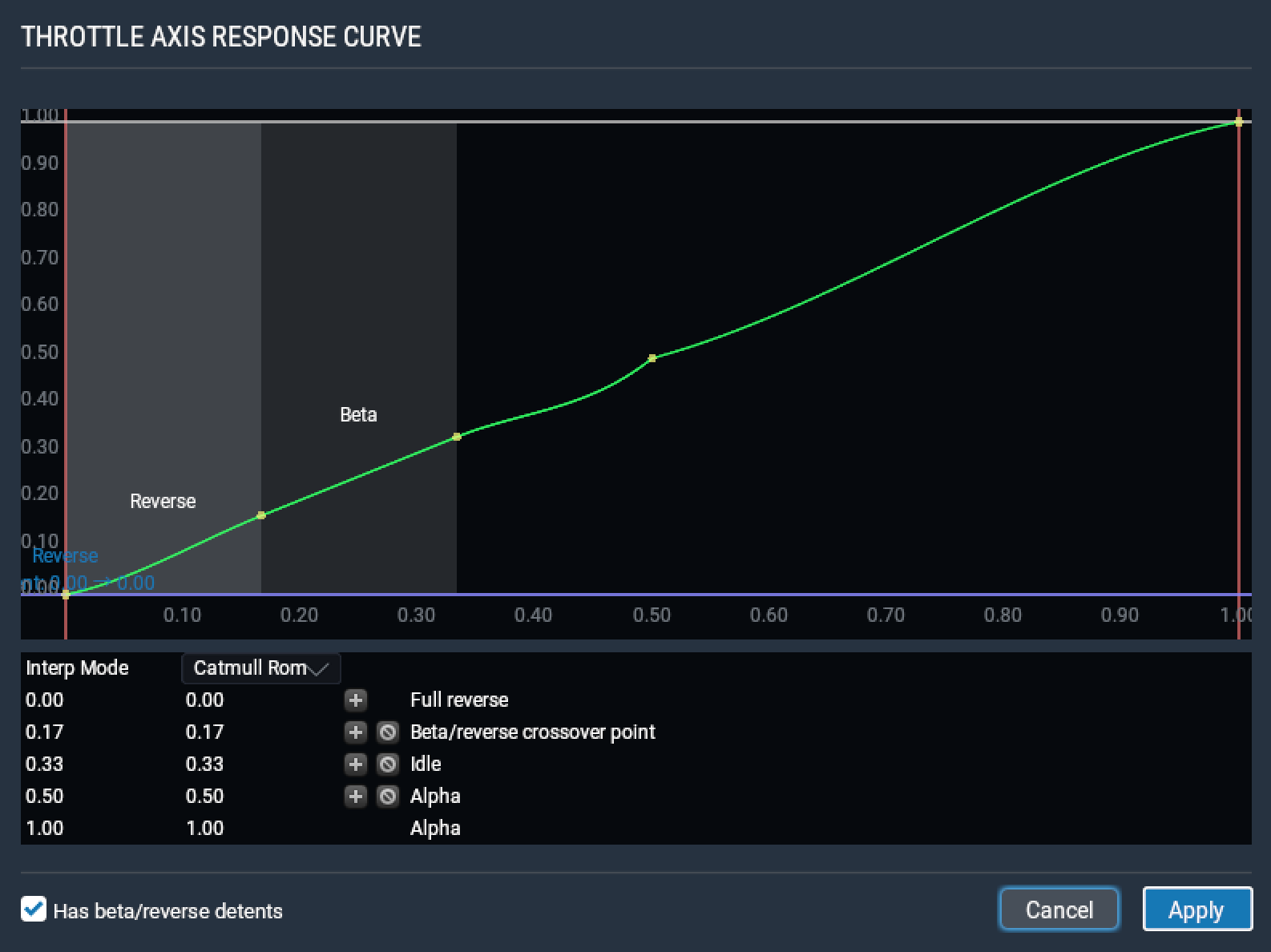 Figure 4.7: Example of custom response curves for a throttle axis

Click the PFC Hardware button to set up special equipment for use in X‑Plane. This tab is generally used on multi-computer X‑Plane configurations in professional, FAA-certified simulators or to tie in various GPS navigators (such as a real Garmin 96/296/396 or a 430 GPS radio). After being connected to the computer, this equipment should be set up per the manufacturer’s recommendations, then checked off on the Equipment screen to tell X‑Plane that it is connected.

Please wait... it will take a second!